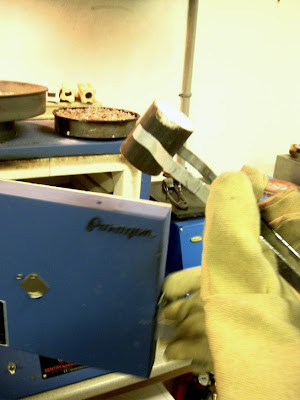 The wax sculptures have been melted out of the investment leaving behind a hollow space inside the very, very hot flask. 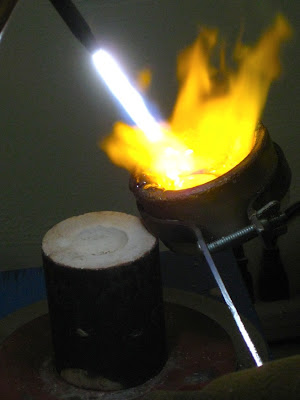 Now it's time to  slip on flame proof gloves and welding goggles, pull out the torch, and melt some bronze. This takes about 5 minutes. 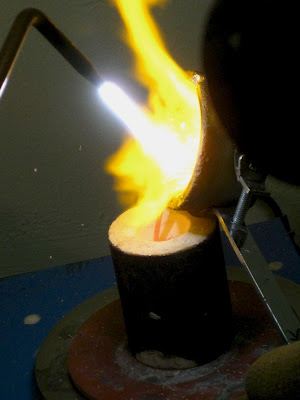 Once the molten bronze starts to swirl around in the crucible it's time to pour. Note the orange stream of bronze going into the flask. Hot, Hot, Hot. 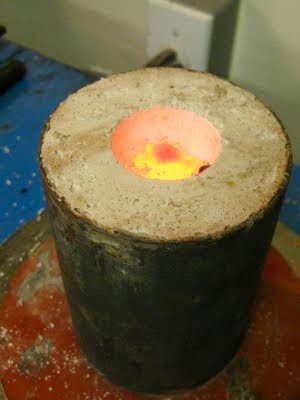 It's in there, and it should have filled ALL the hollow areas... Let us pray... In lost wax casting you can work hours and hours on the wax sculpture, just to loose everything in that .05 seconds of poring. 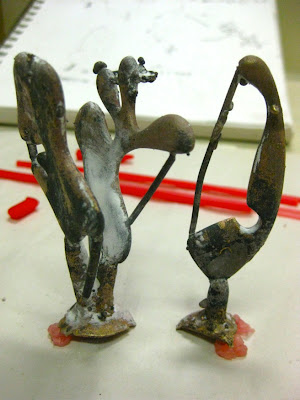 And here they are! 3 small almost perfect bronze sculptures!!! There are a few nubs and surface burps that will be removed when I take off the casting sprues. Then, well then we move on to polishing. This is not a quick process.
Posted by Brad Ford Smith No comments: Links to this post 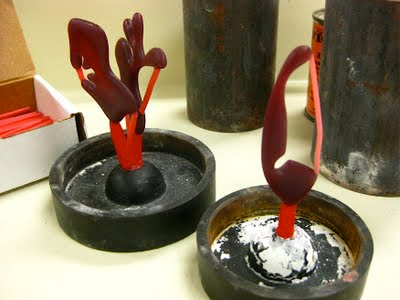 It's called sprueing; attaching wax sticks (the red stuff) to the wax sculptures (the purple stuff), then mounting the sculptures onto a mold base(the black stuff). Next the steel tubes you see in the background, slide into the bases and are filled with investment (high temperature plaster). The wax will be burned out leaving a hollow area that the metal, in this case bronze will be poured into.

Technically, I think I followed all the rules of lost wax casting, but during the pouring all you can do is hope for the best. I'll be pouring/casting next week, so stay tuned to find out if they turn out to be beautiful sculptures or monstrous blobs?!

You can follow this project as well as all the other stuff going on in and around the studio by subscribing at Brad Ford Smith Blog.
Posted by Brad Ford Smith No comments: Links to this post 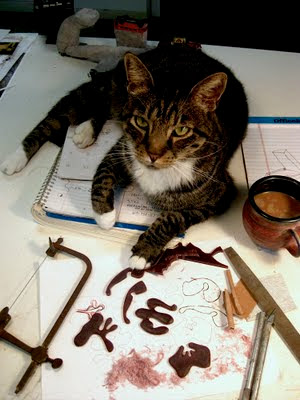 I started a Lost Wax Casting class at the Creative Arts Center last Thursday. As you can see Stanley, the art critic is letting me know which of my wax sculptures needs more work. Eventually the wax sculptures will be cast in bronze and become part of a wall mounted installation.
Posted by Brad Ford Smith 1 comment: Links to this post 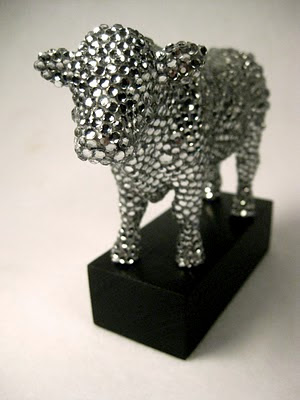 About 18 years ago there was a city wide public sculpture project in Chicago where all the artists were given life sized fiberglass cows to do artistic things to. As you can imagine they did just about anything you can imagine to those cows. It was a very big success.

The city of Dallas followed suite a few years later, except they used a fiberglass Pegasus. Personally I think the Pegasi supplied to the artists were over designed, with to much pre-built in creator, so most of the Pegasi I saw were not very good. Some of them can still be seen around town 10 years later. I was actually asked to do a conservation assessment on one. It was such a bad mix of badly mixed mediums that I pronounced it lame and suggested they shoot it.

Anyway, I started thinking about all of this because I spent today making a 2394 rhinestone incrusted bovine as a birthday present for a dear friend. She's having one of those landmark birthdays, the kind that includes a big California blow out built around a cowgirl theme.

I was kind of surprised to find that when my socially sophisticated friend moved to LA, she started cultivating her very, very slight association with cow culture into a Texas Cowgirl gone LA mystic.

Happy Birthday Cowgirl! Don't take your spurs off until the saloons close up and your horse falls asleep.
Posted by Brad Ford Smith 1 comment: Links to this post