Planning How to be Strategic in my Planning 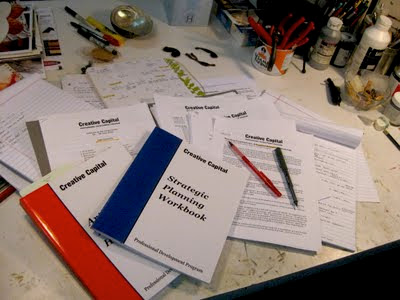 Usually my posts are kind of a light hearted ramblings, but this 3 day Creative Capital Professional Development Program at Arthouse kind of knocked my for a slow loop. Most of the info was standard business planning stuff infused with a fine art perspective. And the other 24 artists were a joy to meet and interact with. The 5 instructors were insightful, approachable, and vocal with their opinions. All good stuff.

But now I am back in Dallas, rewriting my notes and working on the Strategic Planning Workbook... and I realize that I don't know what the fuck I'm doing. I know kind of what I should be doing, but mostly I just blow in the wind like a tumbleweed, hoping to get snagged by a barbed wire fence with a nice view.

I'm going to approach The MAC or the Dallas Contemporary to see if they would apply to have Creative Capital come to Dallas. Having a local group of artists to meet with and work though this with would be wonderful.

At any rate, I'm doing my homework now. Stay tuned.
Posted by Brad Ford Smith No comments: Links to this post

A Little Fungus For A Good Cause 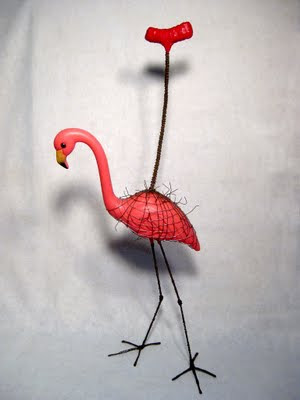 I should have posted this sculpture before the Art Conspiracy's fundraiser happened... Well I'm doing it now.... This is Cordycep Flamingo. He was part of the Better Gnomes and Gardens auction put on by Art Conspiracy.

He is your average pink flamingo except he is suffering from a cordycep fungus. This type of parasitic fungus mostly infects bugs, like grasshoppers and ants, slowly driving them insane and turning their bodies into stalagmite covered husks. It looks like a horrific way to die. I would love to see this happen to a few of the fire ant in my front yard.

I created this sculpture in hopes that placing it in your yard or garden it will act like a scarecrow, and scare the holly crape out of all the fire ants.

By the way, a few of my friends did point out that items at fundraiser tend to sell better if they are based on humor or cutely puppies, and not horror show fungi. But like the commercial says Who doesn't like to kill fire ants? And I am pleased to say that it did sell for a nice amount.

To see some great photos of cordycep covered bugs, as well as lots of great pictures of Normal bugs and fungus, check out Kim Fliming's Flickr site.
Posted by Brad Ford Smith No comments: Links to this post