And The Idea Fund Grant Goes To... 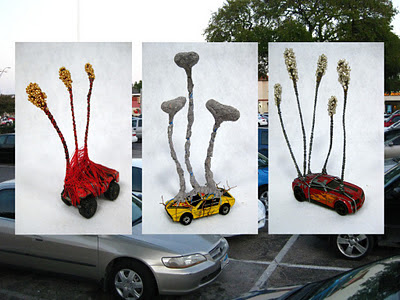 This was my second time to apply for an Idea Fund grant. The first was in 2009, as a joint effort with Beam, Plank and Flitch, constructing 6 public wood benches made from urban harvested trees. That one missed because I think the judges thought it was to pedestrian and not art centric enough. Although sense that time Dallas has become over run by urban harvesters.
In 2011, I applied with the Automated Cordycep Project:
The Automated Cordycep Project is about playing with a narrative; it’s about combining sculpture, nature, and science, with a gorilla approach to exposing the public to a sci-fi narrative of near future disaster…
And the prize… went to somebody else. Actually 10 somebody elses. I looked over the list, and can say that on first glance, they all look like solid proposals. Each having a large friendly public component, which I think is where my project might have been lacking. Mine had public interaction, but more on the level of terrorizing large crowds with remote controlled cars infected with a parasitic fungus.
So. I’ll add this to the list of impressive art organizations that I have applied to but have not been accepted by. It is said that if you don’t get rejection notices, you’re not trying hard enough, which I do think is true, although I really do prefer the non-rejection notices.
Posted by Brad Ford Smith No comments: Links to this post