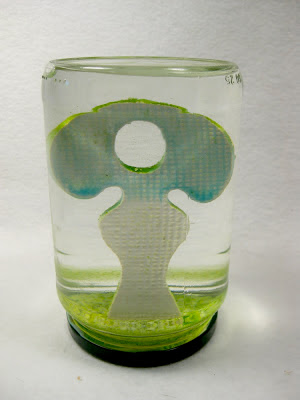 Been working on a series of sculptures that walk the line between snow globe and lab specimen.

I've never made a snow globe before, so I turned to the world of DIY videos. It's surprising how many  there are out there, and how 90% of them are doing it wrong. For one thing, you have to submerge the globe in water while putting the lid on, other wise there is no way to prevent air bubbles.

I know what you are saying, Well mister smarty pants, I see an air bubble in your snow globe! Yes you do, and that is because I didn't presoak the ceramic sculpture before putting the lid on the globe. That air was trapped inside the pores of the ceramic. Who would have ever thought of that?

You might also be saying, Looks a little green inside that magical wonderland. That's probably due to the algae feeding on the proteins from the egg shells. Egg shells and mother of pearl are what they used before the invention of plastic snow flakes. That said, I kind of like the green. It adds a bit of realism to the old, musty lab specimen effect.
Posted by Brad Ford Smith No comments: Links to this post